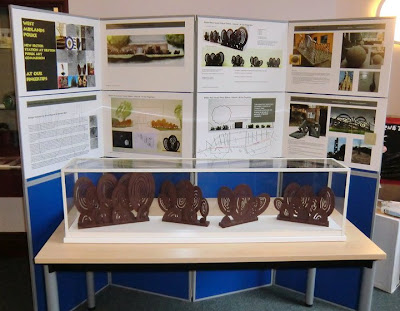 Hamish Marr and I are currently working on designs for a sculpture for the new Police Station at Bilston, West Midlands.
On Monday 27th September we set up a display of the proposed sculpture in Bilston Town Hall, a stone's throw from the site of the Police Station. The display will be on view to the public until Monday 4th October.
Posted by Ailsa Magnus MRBS at 02:22 No comments:

http://www.durhamtimes.co.uk/news/8399504.Artist_gives_first_look_at_Market_Place_timeline/?ref=rss
Posted by Ailsa Magnus MRBS at 07:52 No comments: 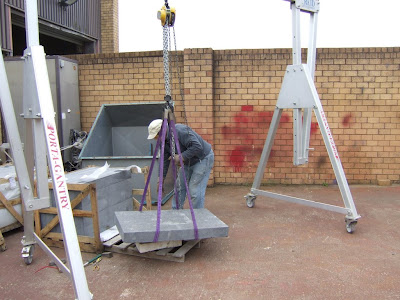 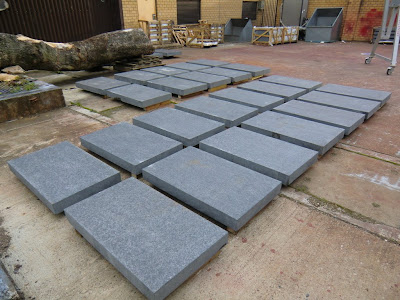 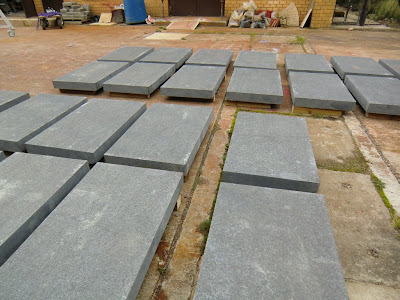 Posted by Ailsa Magnus MRBS at 13:05 No comments:

Delivery of the granite 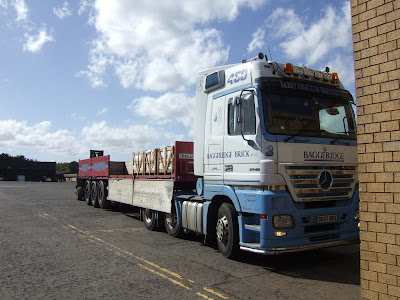 The granite for the Time Line was delivered this afternoon. 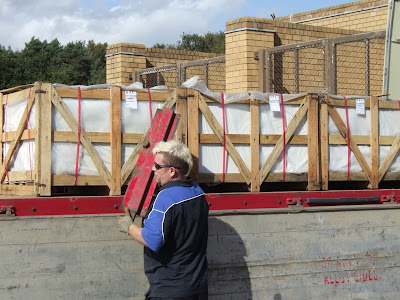 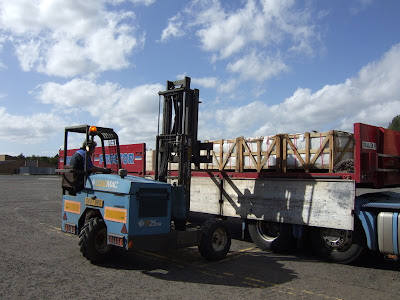 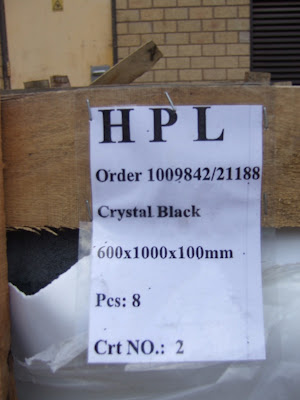 All 7 tonnes are now waiting to be unpacked and engraved. 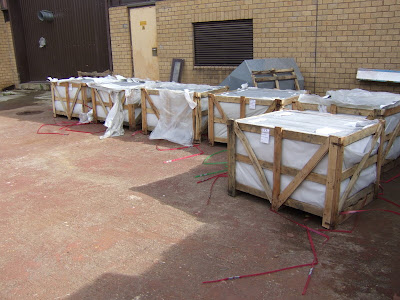 Posted by Ailsa Magnus MRBS at 11:46 No comments:

Actual size model of one section 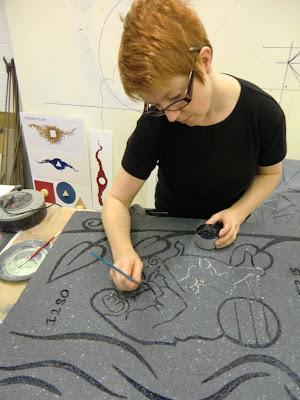 Each section of the Time Line will be a 600 x 1000 x 100mm engraved granite block.
A number of the blocks will have bronze roundels showing highlights in history. 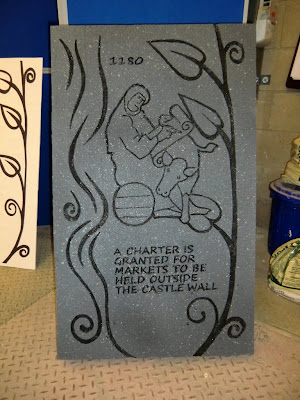 Posted by Ailsa Magnus MRBS at 13:28 No comments: 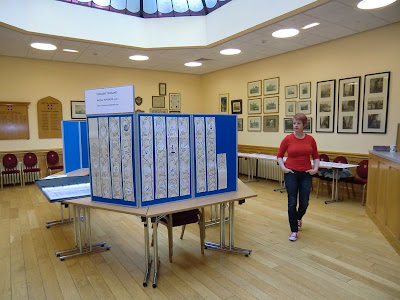 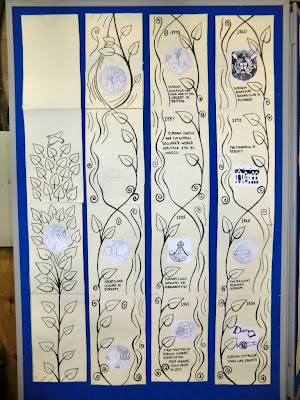 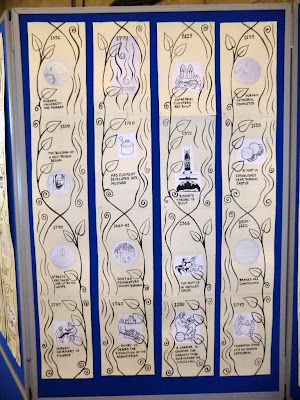 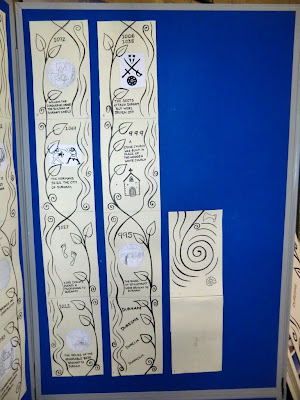 Posted by Ailsa Magnus MRBS at 13:24 No comments: 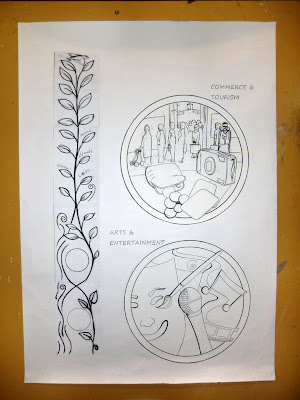 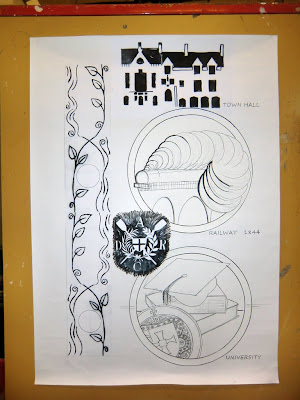 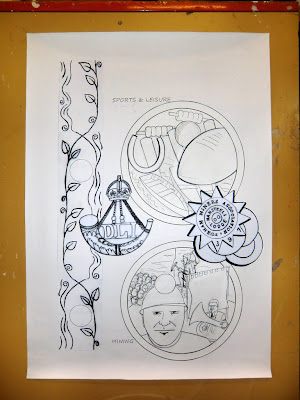 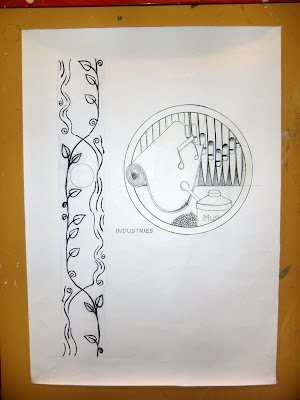 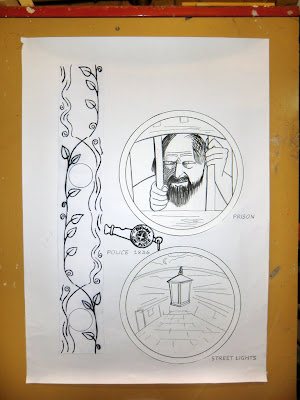 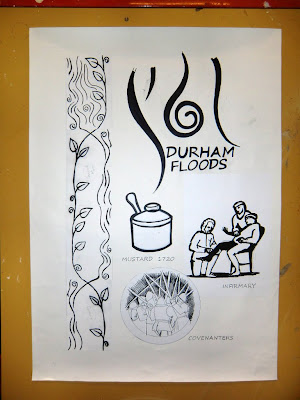 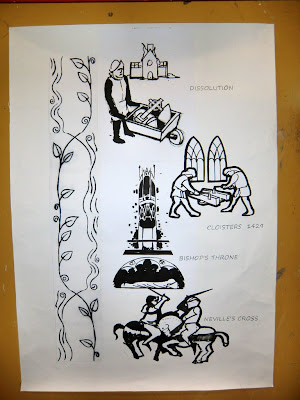 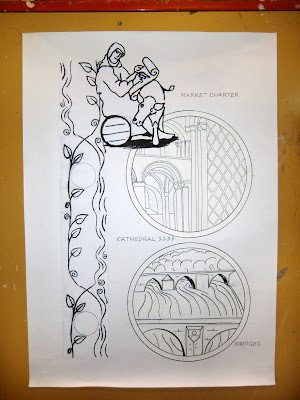 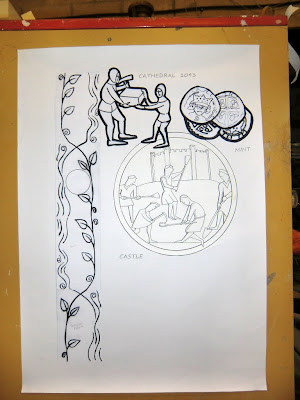 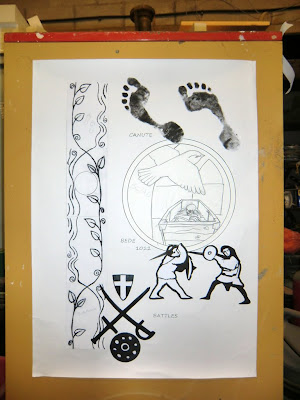 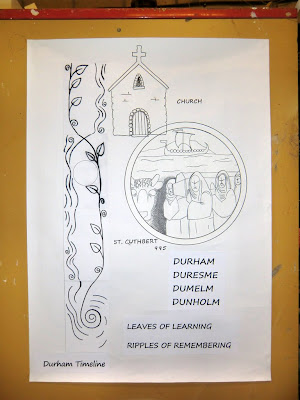 Posted by Ailsa Magnus MRBS at 12:58 No comments:

995 The Community of St Cuthbert settle at Dun Holm

St.Cuthbert died on the Inner Farne island and was buried on Lindisfarne. People came to pray at the grave and then miracles of healing were claimed. To the monks of Lindisfarne this was a clear sign that Cuthbert was now a saint in heaven and they, as the saint's community, should declare this to the world.

In those days people felt it important, when they prayed for help or healing, to be as close as possible to a saint's relics. And so, if a community made relics available that was equivalent to a declaration of sainthood. The monks of Lindisfarne determined to do this for Cuthbert.

They decided to allow 11 years for his body to become a skeleton and then 'elevate' his remains on the anniversary of this death (20th March 698). We believe that during these years the beautiful manuscript known as 'The Lindisfarne Gospels' was made, to be used for the first time at the great ceremony of the Elevation. The declaration of Cuthbert's sainthood was to be a day of joy and thanksgiving. It turned out to be also a day of surprise, even shock, for when they opened the coffin they found no skeleton but a complete and undecayed body. That was a sign of very great sainthood indeed.

So the cult of St.Cuthbert began. Pilgrims began to flock to the shrine. The ordinary life of the monastery continued for almost another century until, on 8th June 793, the Vikings came. The monks were totally unprepared; some were killed; some younger ones and boys were taken away to be sold as slaves; gold and silver was taken and the monastery partly burned down. After that the monastery lived under threat and it seems that in the 9th century there was a gradual movement of goods and buildings to the near mainland.

The traditional date for the final abandonment of Lindisfarne is 875ad..

The body of St.Cuthbert, together with other relics and treasures which had survived the Viking attack were carried by the monks and villagers onto the mainland.

For over 100 years the community settled at the old Roman town of Chester-le-Street. It was said that fear of further attack took them inland to Ripon but not for long and on their journey back from there they finally settled at Durham.

1006 Battle of Durham. A Scots army under King Malcolm II is defeated by Uhtred, Earl of Northumbria.

1022 relics of Venerable Bede are brought to Durham

This, Bede tells us, was the advice given to Edwin, King of Northumbria by his follower Coifi, when the king proposed to convert to Christianity.

'As well as being an important defensive site Durham was also an important place of pilgrimage. The early cathedral and shrine at Durham were visited by hundreds of pilgrims who came to visit Durham in the same way as the pilgrims who had visited Lindisfarne a century before. Among the visitors to Durham was King Canute the Dane (1017 - 1035), who as a mark of respect, walked six milesbare footed to the site from Garmondsway, which is now a deserted medieval village situated near Coxhoe. As a gift King Canute returned some of the land that had been taken from the Bishops of Durham by his Viking ancestors. The land included the large estate owned by King Canute in the Tees valley, centred upon Staindrop and Gainford, near Darlington.'

1069 Normans seize the city of Durham

1072 William the Conqueror orders the building of Durham Castle

1132 A mint is established near Durham Castle

1346 The battle of Neville's Cross

The battle of Neville’s Cross, between Scottish and English forces, took place on 17th October 1346, on moorland just to the west of Durham.

The battle of Neville’s Cross was disastrous for the Scots. Not only was their King captured and imprisoned and many men lost, but the following year the English pursued their advantage and were able to occupy almost the whole of Scotland south of the Forth and the Clyde. (UK battlefields Resource Centre, Battlefields Trust)

The south aisle of the cathedral choir contains the Tomb of Bishop Thomas Hatfield (1345-1381) His tomb is covered by his alabaster effigy which lies snugly tucked under a decorated arch formed by a short stairway leading to the bishop's throne or 'cathedra' directly above. The Bishop's throne at Durham is the highest in Christendom. (http://www.englandsnortheast.co.uk)

1540 Henry VIII orders the dissolution on the monasteries

Mustard was introduced into England in the 12th Century and in early times seeds were coarsely ground at the table using a mortar and it was eaten in this rough state.

It had reached the North-East by about 1486 when monks on the Farne Islands (a monastic cell tied to Durham Cathedral) are known to have used quern stones in the grinding of "mwstert".

In those early days, it was used primarily to disguise the flavour of rotten meat and it was not until the late 1600s that it came to be recommended in its own right.

At that time, the town of Tewkesbury was primarily noted for mustard making, but in those days it was a much weaker substance and it was not until 1720 that English-style mustard, resembling what we know today, really came into being.

English mustard was born largely due to the vision and energy of a Durham City woman by the name of Mrs Clements.

In 1720, she invented a new method of extracting the full flavour from mustard seed. Her methods were secretly guarded but involved grinding the seeds in a mill and passing them through several processes similar to those used in the making of flour from wheat. (Durham Times Friday 7thDec 2007)

1790 Streets of Durham are paved and lit by oil lamp

In 1790 an act of parliament was passed setting up a body of men to pave and light the streets (with oil lamps). (http://www.picturesofengland.com)

1809 The building of a new prison began

'With great ceremony the construction of the current prison began on 31st July 1809 when the foundation stone was laid by Sir Henry Vane Tempest. Large crowds attended to see the Bishop place gold, silver and copper coins of the time into the foundations, bands played and soldiers from the Durham volunteers fired a volley of shots with their rifles to celebrate the occasion but because of problems in its construction, no prisoners were transferred to the new prison until 1819. Indeed, the first architect, Francis Sandys, was jailed for theft of money in building the prison, the plans were heavily criticized and some parts even had to be pulled down and rebuilt.' (http://www.dur.ac.uk )

The town hall was rebuilt in 1851. It was paid for with money raised by public subscription. Also in 1851 a covered market opened.

Following a major dispute at Wearmouth Colliery where the miners agreed to vacate their cottages and resign from their jobs following strike action in March 1869 forcing the owners to capitulate this final act became a major turning point in the Durham Union’s history. On Saturday 20th November 1869, a meeting of delegates in the Market Tavern in Durham Market Square met and established Durham Miners’ Mutual Association. This new union came to life at a fortunate period of history. Durham coal was entering an unprecedented period of prosperity. (http://www.keystothepast.info - The Durham Miner project)

Information has been sourced from the following:

A Jarrold Guide to the Historic City of Durham, Jarrold Publishing 2001

Did You Know? Durham, A Miscellany, Compiled by Julia Skinner published by The Francis Firth Collection 2008

Posted by Ailsa Magnus MRBS at 12:50 No comments: 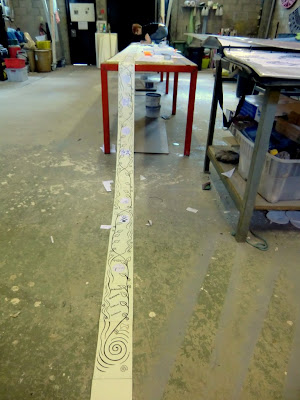 On Saturday September 11th I'll be displaying my designs in Durham Town Hall between 10am and 4pm. 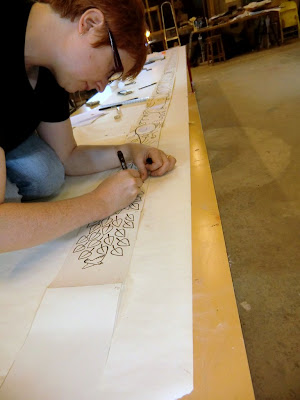 The drawing I'm working on here is a 1:5 scale drawing.

Posted by Ailsa Magnus MRBS at 08:49 No comments: